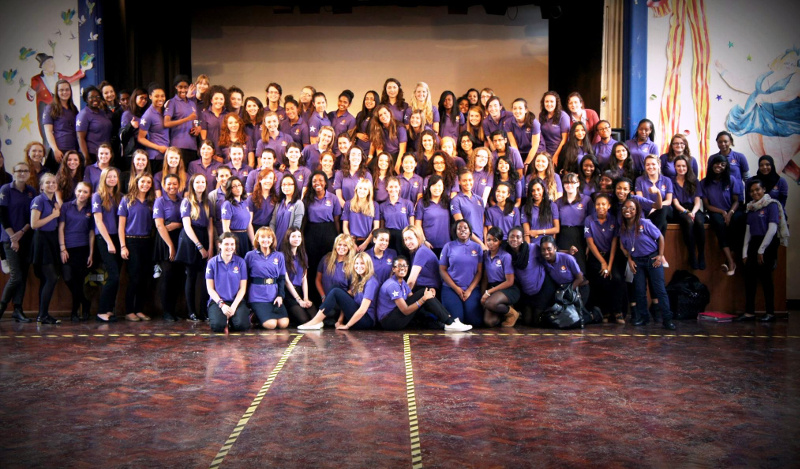 This is a fantastic tradition here at Coloma: A tradition that allows our girls to express their amazing talents as singers, dancers and instrumentalists. Not only does it demonstrate great courage to be up on stage performing but it provides entertainment and an opportunity to reflect on the advantages that those of us at Coloma enjoy. - Mrs Martin, Headteacher

Each year at Coloma our pupils ably led by the Head Girl and her deputies in conjunction with the Charities Committee, discuss, agree and organise a pupil vote on the focus for the major charitable project for the year. We are very proud that our students have raised substantial amounts of charitable funding through the years and we believe this to be a crucial part of fulfilling our Christian duty of caring for others. Whilst events take place throughout the year our main activity happens in the autumn term during Charities Week. Our committee of over 100 6th Upper students ensure everyone gets involved, always doing a fantastic job organising the events and the main Talent Shows where performances as diverse as Guitar playing to the teachers rapping routine can regularly be seen! The shows are a great opportunity for everyone to have fun but in between each performance, the Charities Committee are busy collecting donations and organising other events including daily cake sales and tuck shops!

Despite what some national newspapers say about the lack of response/interest young people under the age of 19 make towards charitable causes, especially where donations are required; Coloma girls are quite the opposite. Not only do Coloma girls want to make a difference to others, they are generous with their pocket money too. Moreover, they have a true appreciation of how a good education can shape the future, enrich life and enable one to reach their God-given potential. Of course, those values and visions are stimulated and nurtured at home. Parents are the first educators of our girls and we know how much our parents support their daughters’ education.

As always, your generosity will be greatly appreciated. The Charities Team fully understand the constraints of family budgets, yet we are wealthy in our education and family life. Donations, no matter how small, collectively become a very powerful tool to the overall success of any project. To make a donation to this year’s charity please contact the school for a Gift Aid form. 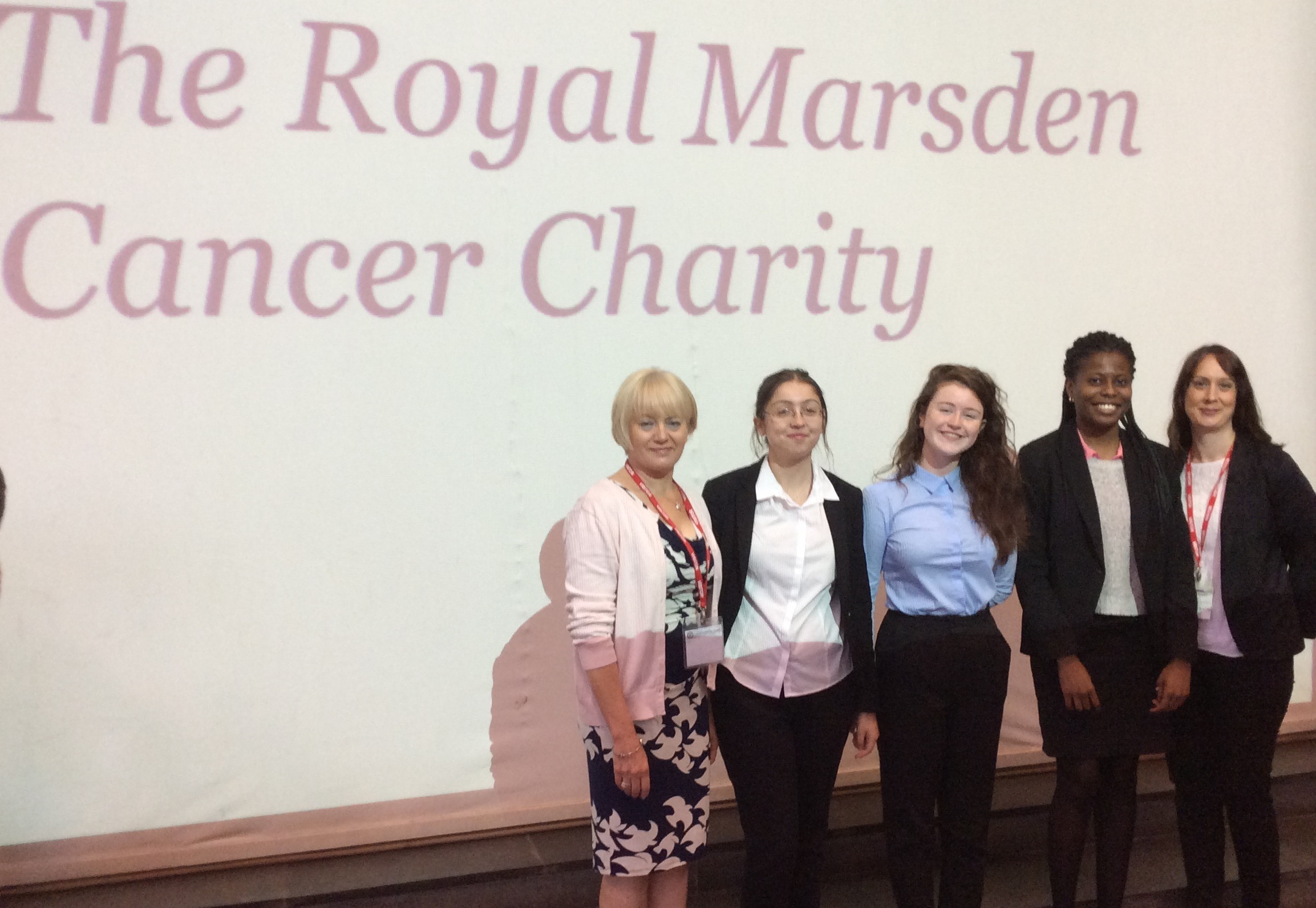 This year our school has pulled together in true community spirit to raise funds for a charity close to many pupils’ hearts, the Royal Marsden Cancer Support Charity. The school saw an overwhelming amount of participation by pupils and their families, staff and friends during their annual Charities Week for which the Royal Marsden Cancer Support had been voted by students as their chosen charity. Coloma’s eventful week raised valuable funds for the charity which will be used towards cancer research, diagnosis, treatment and care for patients.

The pupils decided to have a theme of “inspirational women” and with more than 80 girls on the Year 13 charities committee the fund-raising activities were action-packed and engaging. From cakes sales to dance, singing and talent shows, everyone had a chance to get involved and raise money for a worthy cause. The A Level media students produced a spectacular Coloma Carpool Karaoke video featuring outstanding performances from the staff! The A Level Art students created more than 50 paintings of inspirational women, including paintings of Marilyn Monroe and Adele who also appeared in the inspirational women dress up day along with many others.

We are extremely proud that during a fun-filled week we have raised over £6,500 for the Royal Marsden Cancer Support Charity.

To make a donation to this year’s charity please fill in a Gift Aid form, available in our download section, or from school reception. 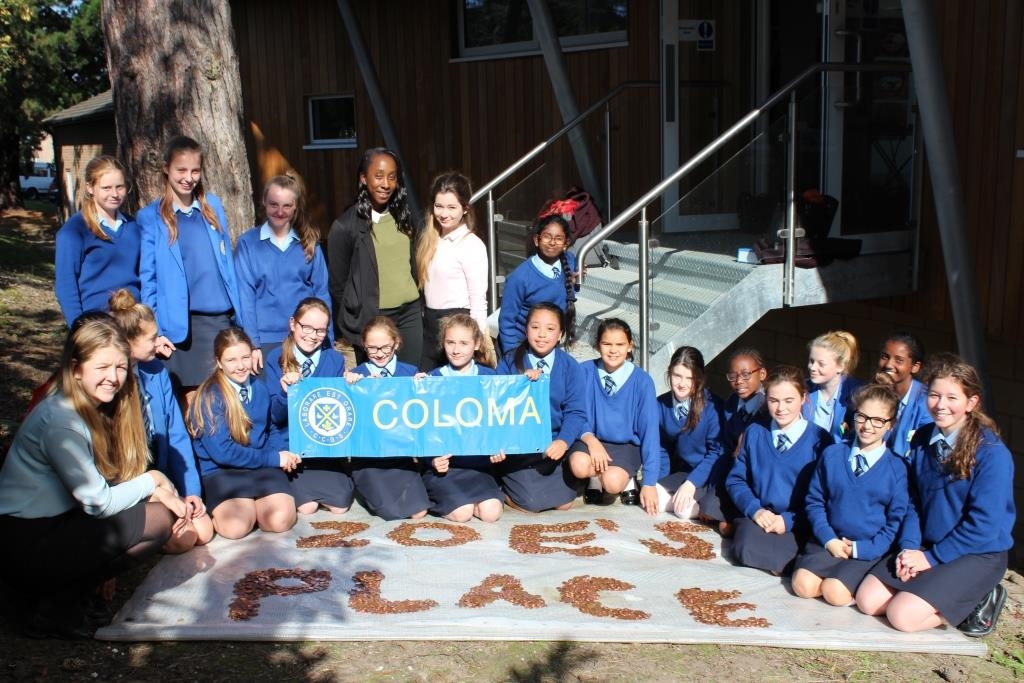 In 2015 another wonderfully successful and engaging Charities Week. The 1000 girls at Coloma voted to support Zoë’s Place Baby Hospice in Coventry, which is a home from home for children who have life limiting or life threatening conditions. The funds raised go towards palliative and respite care for babies, infants and children from birth to five years old.

There was a great spirit as the girls joined forces to plan all the events based on a &#8220Back in Time” theme. There were more than 80 girls on the Year 13 charities Committee who all worked hard to ensure the fund-raising activities were a great success and allowed for whole school participation throughout the action-packed week. From sponsored reading challenges and cakes sales to dance, singing and talent shows, the week was certainly a creative one. The &#8220Are you Smarter than the Teachers?&#8221 Quiz sparked great entertainment and a spectacular win for the teachers, of course! </p> <p> The line-up included a range of sell-out lunchtime shows including a film produced by A-Level Media Studies students that contained highly amusing classic movie scenes with several brilliant performances from staff and sixth formers. </p> <p> The girls&#8217 dedication and inspiration to make a difference really shone through and we are very proud of their wonderful work in raising over &pound;8,000 for Zo&euml;&#8217s Place. <p> </div> <div id="2014Charity" class="mainpagetext"> <h1>2014/15 Charities Week</h1> <img class="ontherightlscape" src="/images/charities1415.jpg"> <p> In 2014 the girls at Coloma voted to support the Premature Babies&#8217 Unit at Farnborough (SCBU). We paid several visits to the Unit before planning a Charities week in the Summer Term, to see where how funds would be going and the tiny babies we would be helping. </p> <p> There was a great spirit of camaradie planning all the events and a range of events and activities were on offer to all years. There was a lot of imagination and creativity involved; for example, an excellent Mask Making Workshop which received great reviews. Mrs Martin helped to launch this year&#8217s cycle by batting off at the Teachers vs Sixth Form Rounders&#8217 Match on a lovely day in July. The Week&#8217s events included a range of shows; the highlight as always being the Teachers&#8217 Performance. Mr Fagan-King made a spectacular debut performance. The Media students composed some comical short films which added an extra element of entertainment to the stage performances. We are indebted to all the Year 13 girls for their wonderful work and for raising over &pound;6000 for the SCBU. </p> </div> <div id="2013Charity" class="mainpagetext"> <h1>2013/14 Charities Week</h1> <img class="ontheleftlscape" src="/images/charities1314.jpg"> <p> The Charity chosen in 2013 was the &#8216Make a Wish Foundation UK.&#8217 </p> <p> Make-a-Wish grant magical wishes to children and young people fighting life-threatening conditions. Make-A-Wish aims to grant 1,000 wishes per year. Even the smallest donation goes a long way and is used to continue their vital work. We would like to thank all those involved in these efforts, which helped raise &pound;10,000 for the &#8216Make a Wish Foundation UK&#8217. </p> <p> Further information about the Make a Wish Foundation including wonderful stories of families they have helped can be found on their website <a href="http://www.make-a-wish.org.uk" target="_blank">http://www.make-a-wish.org.uk</a> </p> </div> <div id="2012Charity" class="mainpagetext"> <h1>2012/13 Charities Week</h1> <p> The 2012 Charities team invited the whole school community to select one charity from a list of nine. </p> <p> Maybe that appreciation of such a precious gift, an education in a safe, loving environment and the opportunities afforded to each and every student at Coloma, has opened their eyes to the inequalities of opportunities to girls in the impoverished zones of the world. Sadly, gender does discriminate against females and often education is unavailable, boys take precedence. Such discrimination led the student body to Select &#8216Plan UK&#8217 as the 2012 charity. </p> <p> &#8216Plan UK&#8217 tries to address this by sponsoring girls to stay in education so that they can break the poverty cycle. Girls are often forced into labour, early marriage or work in factories, thereby physically and emotionally losing their childhood very early on because families are too poor to support their daughters&#8217 education. We must remember that despite our global economic decline, developing nations pay for the privilege of both healthcare and education. </p> <p> We have choices, others do not. Coloma students nominated this charity because they wanted the vulnerable to share the opportunities that education brings. </p> <p> A Cheque was presented to Plan UK for &pound;15,844.70 in July 2013. </p> </div> <div id="2011Charity" class="mainpagetext"> <h1>2011/12 Charities Week</h1> <img class="ontheleftlscape" src="/images/charities1112.jpg"> <p> The charity chosen by Coloma students for the 2011 year was the Paediatric Intensive Care Unit (PICU), based at Southampton General Hospital. A past pupil, now a post-graduate, highly trained specialist intensive care practitioner nurse, is based there and forwarded a proposal to the charities&#8217 committee to support their amazing work. The fantastic efforts of all concerned raised in excess of &pound;20,000 for PICU. </p> <p> For more information about PICU Southampton, please visit their website <a href="http://www.uhs.nhs.uk/OurServices/Childhealth/Paediatricintensivecareunit/PaediatricIntensiveCareUnit.aspx" target="_blank">here</a>. </div> </div> </div> <div class="footer" id="footer"> <div class="footercontent"> <div class="footercolumn1"> <address> <span class="highlight">Coloma Convent Girls' School</span><br /> Upper Shirley Road<br /> Croydon<br /> CR9 5AS<br /> Tel: 020 8654 6228<br /> Fax: 020 8656 6485<br /> </address> </div> <div class="footercolumn2"> <p> Headteacher: <span class="highlight">Mrs. E. Englefield BA Hons PGCE</span> </p> <p> Chair of Governors: <span class="highlight">Mr Mike Buckingham</span> </p> <div> <a href="https://www.facebook.com/pages/Coloma-Convent-Girls-School/114711705210730" target="_blank"><img class="noshadow" src="/images/facebook.png" alt="facebook" /></a> <a href="https://twitter.com/colomasport" target="_blank"><img class="noshadow" src="/images/twitter.png" alt="twitter" /></a> </div> </div> <div class="footercolumn3 textright"> <p> <a href="\sitemap.cfm" class="nounderline lightblue">Site Map</a> </p> <p> <a href="\terms.cfm" class="nounderline lightblue">Terms of Use</a> </p> <p> <a href="\privacy.cfm" class="nounderline lightblue">Privacy Policy</a> </p> <p> <a href="\disclaimer.cfm" class="nounderline lightblue">Disclaimer</a> </p> <p class="designby"> Site design by <a href="mailto:bcourt@coloma.croydon.sch.uk" class="nounderline lightblue">Ben Court</a> &copy;2020 </p> </div> </div> </div> </body> </html>