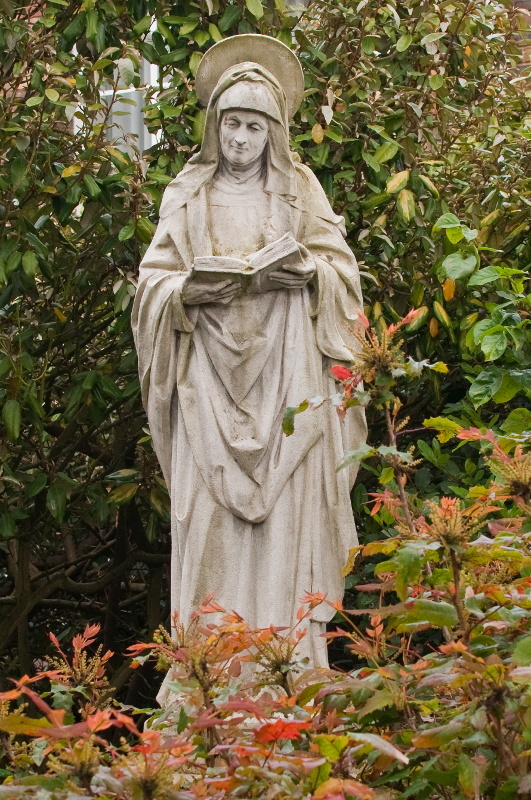 St Anne’s College was founded on 12th September 1909 by the Daughters of Mary and Joseph (in those days known as the Ladies of Mary). It was established as a sister convent and sister school to Coloma, which at that time was in Tavistock Road, West Croydon.

St. Anne’s was situated in the Surrey Hills, near Sanderstead railway station. Part of the building’s perimeter wall and railings are still in place today together with gates which bear the same distinctive badge worn by the sisters on their blue scapulas. Sadly, the school itself closed in 1979 with the abolition of Direct Grant schools.

Over the years there have been many connections between St. Anne’s and Coloma, never more than today. The chapel at Coloma is named after St. Anne, and the statue outside the chapel once stood in a niche above the front door of St. Anne’s College. The chapel doors, also from St. Anne’s, were brought to Coloma in 1982.

The memorial window in the foyer of the chapel is very special indeed. As you can see from the picture, it commemorates the period when St. Anne’s pupils were evacuated to Dunblane, Scotland during the Second World War. This window was in the entrance hall of the college in Sanderstead until the closure.

If you wish to find out more about the St Anne’s Old Girls’ Association, please email sacoga@hotmail.co.uk

The Daughters of Mary and Joseph

“Whatever we do and wherever we are, we are concerned for those seeking spiritual meaning and values in their lives and we are called to make room in our hearts for each person, especially those of whom society says, ‘there is no place for you here’”

The Daughters of Mary and Joseph came to England from Belgium in 1869, setting up a residence in Croydon and establishing Coloma School which is still flourishing today. In 1882 a community and school opened in Scarborough. Other schools followed, among them St. Anne’s College, Sanderstead, Coalville, Normanton Rise Preparatory School, Merrow Grange, Forest Hill.

The Sisters also taught in other schools including Regina Coeli, St. Mary’s, West Croydon, St. John Rigby, and St. Paul’s, and St. John’s in Portsmouth and contributed to the wider educational community through Coloma College of Education (For teacher training) at West Wickham. Today in England, the Daughters of Mary and Joseph are involved in various ministries including pastoral ministry in parishes, schools and hospitals, retreat ministry and medical care. There are sisters living and working in Addiscombe, New Addington, West Wickham, Thornton Heath, Sydenham, Herne Bay, Middlesbrough, Scarborough, Jarrow, King’s Lynn, Padstow and Bodmin.

The Sisters run the Emmaus Retreat Centre in West Wickham, Kent and are trustees of Coloma Convent Girls School. They are also responsible for the pastoral care at Coloma Court Care Home in West Wickham.

For more information on the Sisters, there is a pdf in our downloads section, or you can visit their website by clicking here.

A Video Introduction to Coloma Uganda

On February 8th 2010 one of the dreams of the Daughters of Mary and Joseph, Africa Province, came true with the opening of Coloma Primary School in Uganda. Sr Adeodata Ahimbisibwe together with Sr Pascazia Kinkuhaire had for almost a year and a half supervised the construction of the school buildings and a community house.

Coloma Convent Girls’ School is proud to be involved in fund raising efforts for the new school.

The school is a day and boarding primary school and aims to eventually cater for 1,000 children. The school site is situated about 6 miles from Mbarara town and about 4km from the main road. The land of the primary section which consists of 7 acres was purchased by the Daughters of Mary and Joseph in 2003 with a view to establish a primary school. Since then a plantation of 13 acres has been added as a source of food and income for the future.

For more information, please see our downloads section where you will find updates on Coloma Uganda.

Our passion for success is underpinned by traditional values and high expectations to ensure academic achievement for everyone. - Mrs Martin, Executive Principal

In 2010 Croydon Council nominated the Coloma Trust as its preferred sponsor for the proposed academy at Selsdon High School, to be known as The Quest Academy.

Croydon chose the Coloma Trust as its preferred sponsor because of its proven track record of running high achieving schools and because of its long standing commitment to the local community. (Coloma Convent Girls’ School is one of the most successful schools in Croydon. In the last three Ofsted inspections, the school was judged outstanding. The Trust also has a deep historical tie with the community, having provided education in Croydon for over 140 years).

The Quest Academy works closely with Coloma School. It is co-educational and welcomes students of all faiths and none. The school follows the National Curriculum. Mrs Maureen Martin, Headteacher at Coloma is the Executive Principal at the academy.

Since its opening in 2010 the Quest Academy has gone from strength to strength and opened its new sixth form centre - Quest6 - in September 2012. Results have turned around at a phenomenal rate, taking GCSE passes (5 GCSEs at A*-C including English and Mathematics) from 23% to 62% (above the national average) in three years, receiving ministerial recognition for this success and achieving the accolade of &#8220Croydon Secondary School of the Year” in Autumn 2013. Staff and students at The Quest Academy saw the completion of the new Academy building, which fully replaced the existing buildings in September 2014.

With the Quest Academy officially recognised as one of the UKs fastest improving academies, The Coloma Trust was invited by the Department of Education to extend its family of schools by sponsoring an additional Croydon Academy. The Archbishop Lanfranc School passed to The Coloma Trust and Coloma Convent Girls’ School in the Autumn of 2014.

The Archbishop Lanfranc Academy will be led by Principal Designate, Michael del Rio, supported by Andy Crofts as Executive Principal who will retain his role as Principal of the Quest Academy. Mrs Maureen Martin, Headteacher at Coloma Convent Girls’ School for 18 years and Executive Principal of the Quest Academy will oversee all three of the Trust’s schools as well as continuing her role as Headteacher at Coloma.

The progress at Quest has exceeded the expectations of even the most optimistic among us. I am looking forward to the challenges we will face at Archbishop Lanfranc and ensuring that all students benefit from the outstanding education offered by Coloma. I have worked alongside Maureen and Michael for four years now and am confident that our joint expertise will lead Archbishop Lanfranc to future excellence. - Andy Crofts, Executive Principal at Archbishop Lanfranc